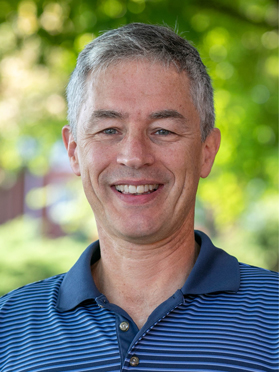 Owen earned a Bachelor’s degree in mathematics with secondary certification at Messiah College in Grantham, Pa., an M.S. and Ph.D. in mathematics at the University of Delaware, and a Master's of Applied Statistics at Penn State University.  Owen taught for three years at Northwestern College (Iowa) before coming to EMU, where he has taught for 24 years.

Owen’s graduate training is in combinatorics (graph theory, specifically), and he co-authored a Discrete Math textbook, published by MAA/AMS in 2018. In addition, he wrote a geometry textbook, Methods for Euclidan Geometry,  published by MAA in 2010, with a  second edition published by Dover Publications in 2021.  His hobbies include playing disc golf, basketball, bridge, and a variety of board games. Owen and his wife, Barbara, have two adult children, Cameron and Lily.

Owen is the program director for Mathematics and Computer Science at EMU.