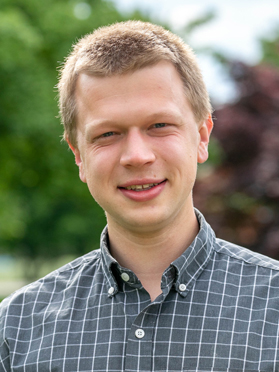 Joshua Lyons is the Front-End Web Developer & Analyst within the Marketing and Communications Department. He works on developing and maintaining the EMU website’s functionality and appearance. He also supervises the creation of EMU-based blogs and email templates. Additionally, Joshua is the primary analyst of website traffic and user data.

Joshua grew up in Madison, VA, living there until 2012 when he moved to Shenandoah Valley to pursue his education. He graduated in May of 2016 with a BS degree in Computer Science from James Madison University. Joshua and his wife, Katherine, were married in the summer of 2016 and currently reside in Harrisonburg with their sons Chase and Blake.  Outside of work Joshua spends his time trail running, backpacking, and enjoying the outdoors.