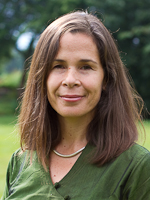 Catherine Barnes has extensive experience designing and facilitating deliberative dialogue, as well as teaching and training adults in working with conflict, strategies for building peace and promoting social justice. More details are on her website: https://www.catherinebarnes.space/

Major Conferences
• Global conference at UN headquarters “From Reaction to Prevention: the Roles of Civil Society in Preventing Armed Conflict and Building Peace”—process design, preparation and facilitation of plenary and large panel sessions of conference involving more than 1,000 participants from civil society, governments, and IGOs, New York, July 2005
• European Regional Conference of the Global Partnership for the Prevention of Armed Conflict—facilitated a consensus building process for more than 250 people to agree the European Action Agenda, Ireland, April 2004
• “Tools for Peace”—lead facilitator of this international, inter-religious peace conference, Sweden, November 2004
• “Role of the EU in the South Caucasus”, lead facilitator of conference for the Dutch Ministry of Foreign Affairs
• Mennonite Church USA’s “Future Church Summit”, lead designer and facilitator of a multi-phase process for church renewal leading to an interactive multi-stakeholder dialogue involving more than 700 delegates., Jan-July 2017.

Dialogue and joint-analysis
• Designed and facilitated numerous seminars for policy makers, political party representatives, civil society representatives and analysts – many involving participants from across conflict divides – to explore various issues in conflict prevention and learning from peace processes.
• Designed and facilitated a series of deliberative dialogue processes for ethnic leaders inside Myanmar/Burma leading to shared vision for future and action agendas for collaborative work.
• Facilitated a series of workshops for governmental and civil society representatives from five East European countries on key problems in majority/minority relations and wrote published reports of the outcomes.

TRAINING IN PEACEBUILDING, GOVERNMENT TRANSITION AND ADVOCACY
• Designed and delivered numerous bespoke training courses on peacemaking and peace processes for groups ranging from the UK government’s conflict adviser cadre, to members of armed insurgency groups, to civil society ‘insider partial’ peacemakers.
• Designed and facilitated training seminars for diplomats and UN officials on conflict resolution and negotiation skills and wrote training manual to accompany the course.
• Designed & delivered a series of trainings for three cohorts of deliberative dialogue process designers and facilitators in Myanmar/Burma to support the peace process and other socio-political change (2014-2017).
• Developed and delivered trainings and training-of-trainers courses on governance transition processes and roles of legislature for new ethnic politicians and civil society activists in Myanmar/Burma.
• Developed and delivered annual module on reconciliation and transitional justice for Responding To Conflict.
• Delivered a series of training seminars on strategies for public participation in peacemaking, including for the Swiss Ministry of Foreign Affairs and for Sri Lankan officials and civic leaders; gave talks on this theme for various audiences in London, New York, Washington and Yerevan.
• Taught EU specialization course on conflict transformation at Austrian Study Center for Peace and Conflict Resolution
• Advised a group of Dutch Malukans on possible roles of diaspora communities in conflict and peacebuilding.
• Designed and facilitated a range of training seminars for minority rights activists on human rights and advocacy, including tailored courses for advocacy at both the UN Human Rights Commission and at the Council of Europe.
• Conducted a series of seminars to train teachers, students and community activists in communication, conflict resolution, and problem solving skills.

PROGRAM DEVELOPMENT
• Advised the European Union in its support for the emerging peace process in Myanmar and the concept of its funding for development of institutions to support the process, 2012.
• Served as strategic adviser to the Global Partnership for the Prevention of Armed Conflict (GPPAC)–2003-2005
• Conducted a review of Conciliation Resources’ Accord program, which led to the development of a new strategic direction for the program and a detailed ‘business-plan’ for achieving it.
• Developed and implemented a three-year program for Minority Rights Group to promote minority rights and cooperation between communities in Bulgaria, Hungary, Romania, Poland and Slovakia.
• Served as an expert adviser to the PEER project of the European Network Against Racism to develop empowerment projects for community organizations fighting discrimination throughout Europe

INDEPENDENT EVALUATION, STRATEGIC REVIEWS AND FIELD STUDIES
• Strategic Advisor and Reviewer for the Consortium Initiative on Nagorny-Karabakh – 2005-2007
• Conducted evaluation reviews of Conciliation Resources’ 5-year peacebuilding program in Georgia/Abkhazia; of International Alert’s peacebuilding program in Georgia/Abkhazia; and of Saferworld’s work in the Western Balkans
• Conducted evaluation research for CHF’s ‘Stable Society Study’ on the impact of participatory community development on conflict in Southern Serbia.

PAX 607: Techniques for Group Facilitation – modified the syllabus and developed a new series of interactive and experiential exercises for course.