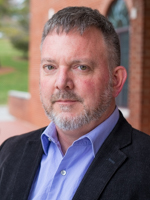 Mark Metzler Sawin grew up in Hesston, a small town in rural Kansas. He earned a B.A., studying Literature and Politial Science at Goshen College (Indiana) and then, after a stint training as a chef and doing free-lance journalism, he earned his M.A. (1997), and Ph.D. (2001) in American Studies at the University of Texas at Austin. in 2001 Mark joined Eastern Mennonite University as a professor of U.S. history. He currently also serves as the co-director of EMU's Honors program and has served as the chair of the History and Political Science program, and as president of the Faculty Senate. In the larger academic world, Mark has served as a member and chair of the Regional Chapters Committee of the American Studies Association; as president and a board member of the Eastern American Studies Association; and as area chair of American Studies for the Mid-Atlantic Popular and American Culture Association. In 2008-09 Mark was a Fulbright Scholar at the University of Zagreb, Croatia; he has remained connected there, returning to teach courses in 2017 and 2019. His scholarship focuses largely on the religious, literary, and popular culture of antebellum America (1840–1850s). His first book Raising Kane addresses Arctic explorer Elisha Kent Kane who in the 1850s authored two “best-selling” books about his travels while masterfully manipulating the popular media to enhance his celebrity status. His most recent books are annotated editions of popular 19th-century author Ned Buntline's early novels: the Mexican-American War story, The Volunteer; or, the Maid of Monterey (1847); and the pirate tale, The Black Avenger of the Spanish Main (1847). These are the first in a series of 19th-century popular fiction that he is editing via his newly founded Emu Editions publishing effort. Mark also works on local African American history projects, recently editing The Way it Was... Coming of Age in Harrisonburg, VA in the Jim Crow Era: The Memoirs of Doris Harper Allen, and, with JMU professor Gianluca De Fazio, writing an article "The 1910 Legal Lynching of Pink Barbour in Harrisonburg, Virginia" which is currently under review.

Mark is married to Erika Metzler Sawin, a nursing professor at James Madison University. They have two children.